Its been 2 months since I’ve been a TH11! GW is going to lvl18 right now and I’ll have him maxed before February ends, this is exciting. For a TH11, there really isn’t much to upgrade except for Warden. He’s basically the only offensive upgrade you’ll get in TH11 and you better have him maxed ASAP. (As if I haven’t drilled it enough in my TH11 guide)

Choose to upgrade an archer tower today to lvl13 (you can see its tiny timer on the bottom of the screen below my AQ).

This is why I hate having good defenses: 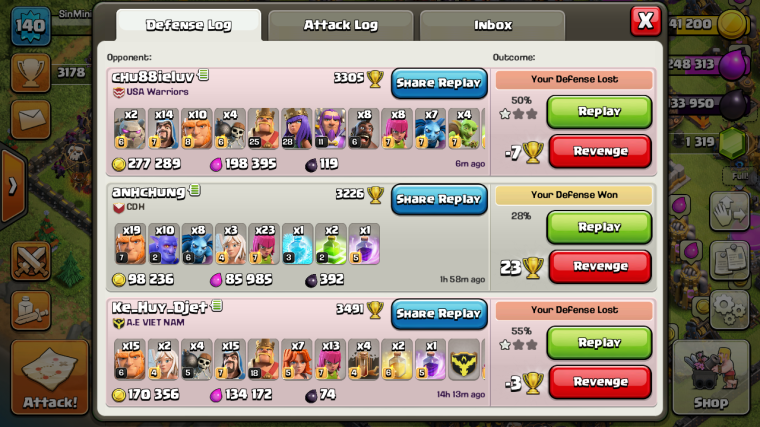 These are actually just 4 defenses, but I needed 2 pictures to capture them all.

The first set of defenses is by anatz and ke_huy_djet. Since I didn’t get the shield within my first defense, I’m forced to defend again. This made me lose 310k/200k within the night.

The second set of defenses is by anhchung and chu88ieluv. Same thing, I lost 370k/280k in one sitting. If I had weaker defenses, I’d be shielded within my first attack with a loss of probably only 180k/90k. Having stronger defenses meant that I lost double the amount of loot than having worse defenses. I still cannot understand how SC doesn’t see the problem that having stronger defenses = more loot lost

And people will still say that its because I’m in low leagues, look closely. I’m already in Champs 3 where is starting to die off and become lower. Yet I’m getting rubbish defenses like these and lose even more loot compared to rushing.