Started 2 upgrades today, 1 being an air defense to lvl3 and the other is poison spell in lab. I did poison because I didn’t want to have my lab completing around the time of AQ being completed.

The storage cap is always annoying, at 200k for DE and 8-10mil for gold/elixir. If I wanted to do 2 expensive upgrades, they have to be at different days because it is usually hard to do 2 expensive upgrades at the same time (eg. 180k for AQ, 120k for bowlers). If the cap was higher, like 250-300k, then doing such upgrades would be far easier. This also means that doing walls would be far easier because I can farm a huge amount of loot before my builders are done and dump all of them into walls.

In retrospect, upgrading AD isn’t quite a good idea because I will need to upgrade them all the way to lvl6-8 before they can give me any returns (remember that upgrading them means that they cannot defend my village). Having only 3 ADs active, lvl6 ADs are actually weaker than 4 lvl4 ADs.

Casual farming loot, this is why I’m only doing half the amount of walls as compared to when it was my holidays. More storage raids means that gold and elixir isn’t balanced, it is easy to lose elixir so that means less walls. Storage raiding also means that I need to balance elixir and DE, so some raids gain very little of the other resource. 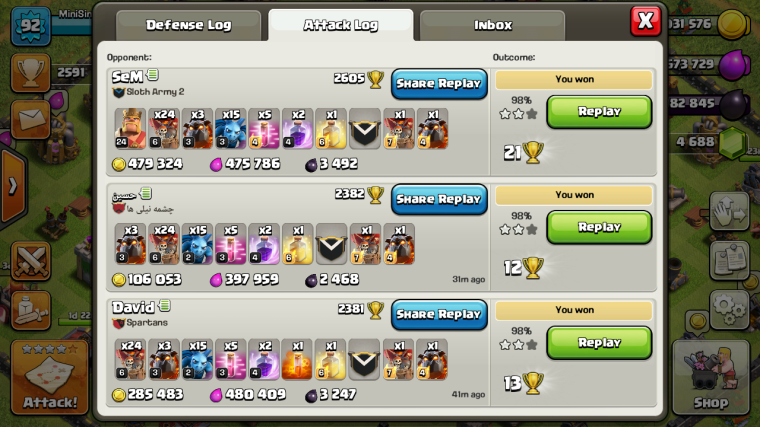