To some TH10 is farming heaven, to others TH10 is farming hell, so which is it? Here’s where many people struggle in in TH10, they think they can storage raid and progress. Just calculate how much elixir you need within the first 2 weeks of TH10, you’ll need around 30+mil in 2 weeks. If you’re spending 200-300k elixir per raid, its going to be a long slog just to farm that amount of elixir.

The best farming throughout the entirety of TH10 is simple barch, nothing fancy needed. But particularly during beginning TH10, barch is even more important. As a new TH10, collector farming should be your sole income, either through barch (recommended) or goblins. Many people will say use dark elixir armies, especially those with 30/30 royals, but dark elixir armies are just as strong as barch if you do not use spells, and spells cost elixir. Instead of wasting DE just to farm elixir, it is much more practical to use the DE you earn to work on heroes (AQ in particular) instead. You really don’t need heroes to farm, even my new TH didn’t need heroes to farm.

As a new TH10, I was able to farm with an upgrading AQ and just a mid level BK and I didn’t even use him half the raids.

I will not cover goblin strategies but they are valid in doing trophy drops, just not as a primary farming army. Goblins cost more elixir when you use things like goblin knife because a lot of spells are used. If minimal spells are used, you will drop trophies like a rock and will drop out of optimal league.

Barch. Simple barch is all you need for the entire TH10, if progress is your priority you should use this all the time.

The additional wiz is to allow you to hit things one layer deep more easily, so DE drills behind one layer of walls are easily hit by the wizards. Do note that the wizards are actually weaker than archers in getting % so I do not bring more than 4, also they cost more elixir and slightly more training time.

Zap spells are used for hitting deep DE drills within the base or getting the last % to get 1 star.

Optimal league here is G1/C3 as a new TH10 and C1/2 when you have 240 camp space and lvl7 barch. The higher you go, the better DE is but the less collector raids become. So adjust and titrate accordingly. 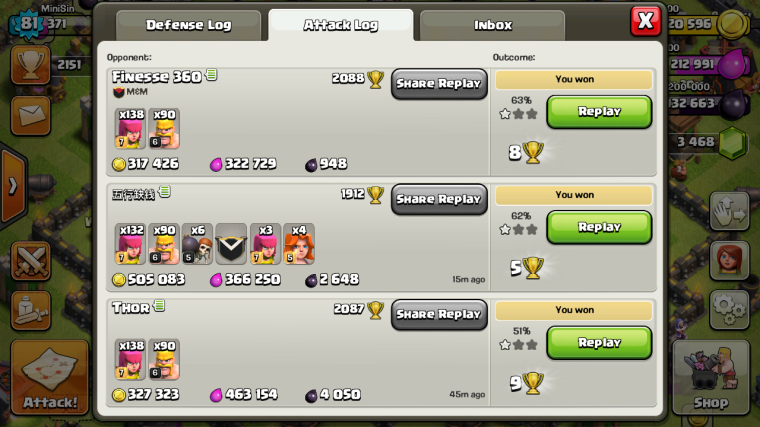 As you can see, you can easily gain a ton of elixir and DE at the same time if you barch. This will allow you to farm for your army camps and lab upgrades while you work on heroes at the same time. As you can see, most of my raids do not require heroes so you are not handicapped when you keep both heroes down like a good farmer.

No tutorial needed for this army, should be quite easy to just collector farm. If you are having trouble getting 50%, bring a cc of valks or bowlers, use your zaps spells (but be aware of the costs) or have a hero ready to get the star.

Barch variants. These combine the main essence of barch but add some other complimentary army. The key role of these sorts of armies is to allow the player to hit premmie bases or bases with collectors inside the base. Here, you let your imagination run wild and adjust

8 giants, 16 hogs + barch – This allows you to break the external layer like barch but also easily hit 1 layer deep. Sometimes you can concentrate your troops from one side and punch deep into the base as well.

Barch + QW – when your AQ is maxed, this is a good alternative to use as you will never fail to get 1 star in raids this way. But once AQ is dead, you need to wait 49min before able to use her again

Barch + bowlers – just a little add on so that you can get 50% easier using bowlers, used when I overflow on DE

Be aware of the costs and training times for these armies, they may be more expensive and take longer time to train than simple laloon, so its up to your own judgement. These armies are also invariably train longer and cost more than barch, so they are less efficient in that regards

Laloon. This is the army you can choose to use after you finished all your elixir intensive upgrades. There is actually no advantage to this army compared to barch except for slightly less nexting time. Its a decent army to use when you cannot log in for extended periods of time, but pales in comparison with barch. The good thing is that this is one of the only storage raiding armies that do not require heroes to be good, so its an alternative to barch.

I used it because I am farming too much and there isn’t much room left to be efficient, so I take a less efficient path and slowly grind out the game. 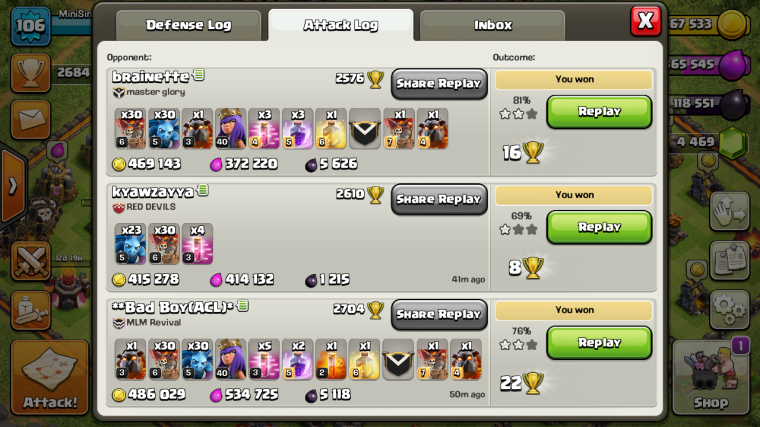 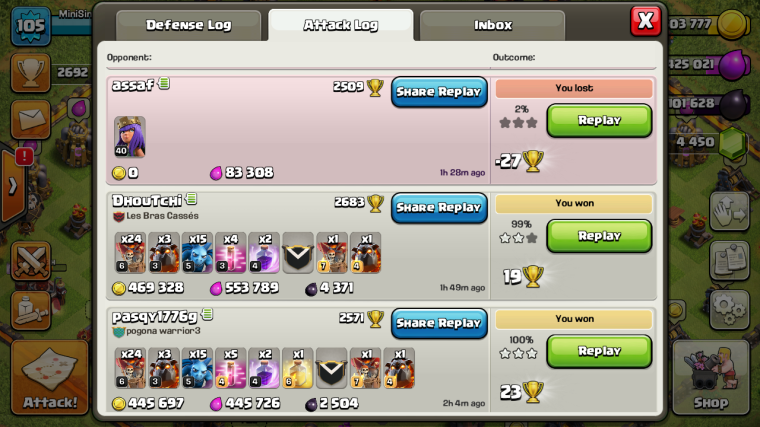 Seems good right? But when you factor in cost per raid and training time, it pales in comparison to barch.

Note: didn’t 3 star because I don’t want the extra trophies, so I quit after getting all the loot

Its actually a simple spam attack, no skill really needed. The best loot comes from bases like above, where there are fully storages and collectors at the same time. Be aware of where the air sweepers are and take them out of they are at the edge of the base, if not then try as much as possible not to head directly towards them, come from their blind side. Haste at the perimeters and rage when you approach infernos and the core in general, heal and haste as necessary once you passed the core. Be sure to lure cc if it is lurable if not then have your poison ready to stop them.

There is a failure rate for this army so be aware of that. There is nothing you can really do sometimes and when you fail, just suck it up. This is the trade off from barch where it is impossible to fail when you use barch.